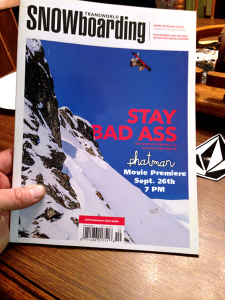 Clear your schedule, cancel your anniversary dinner, and tell your Grandma that you’re going to have bail on that game of Bridge with her and her AARP members. We’re throwing a Movie Premiere party for the highly anticipated, action packed, 2nd installment of Capita’s Defenders of Awesome: STAY BADASS. The movie premiere party will be on September 26th at the shop and will start around 7PM. There’s going to be some product tosses and prizes for coming and we’ll be doing some good ol’ fashioned BBQing and having a few games of SKATE in the parking lot before we put the film on the big screen.

We’ve always backed cooking meat and playing games of SKATE before movie premieres. It’s just the American thing to do. So mark the date in your iPhone, Galaxy or whatever other mobile device that’s the size of your head’s calendar and get ready for one hell of a movie from Capita. Check out the event on Facebook for more details as well. SEE YOU THERE. Video trailer below. Click to play.

BBQ & Games of SKATE followed by the premiere of CAPITA DEFENDERS OF AWESOME 2: STAY BAD ASS